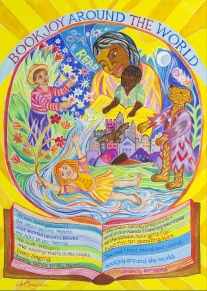 At this amazing gathering of authors, educators, librarians, editors and publishers, we celebrated the Joy of Children’s Books. Mem Fox, Peter Sis and Katherine Paterson were three of the many guest speakers. Linda Boyden, author and storyteller, and myself shared a panel presentation: Celebrating Contemporary Native Americans in Children’s Books. www.ibby.org.

Here is my presentation outline – brief with readings from several children’s books, mostly by Native Authors: How I Became A Ghost  by Tim Tingle; The Absolutely True Diary Of A Part-Time Indian by Sherman Alexie; Looks Like Daylight  by Deborah Ellis; and Buffalo Bird Girl by S.D. Nelson.

Celebrate Books about and by Native Americans, a List of Books, Awards, Publishers and other Resources

Celebrate Books about and by Native Americans

In this list we have selected resources for children and young adults, including:

First, some comments about evaluating books, looking for the presence of stereotypes, historical inaccuracies, or not presenting a Native American perspective.

Judge for Yourself! Here is from an evaluation guide prepared by Anselmo Ramon, Tohono O’odham, former Director of Native American Studies Department in Tucson Unified School District, to help teachers become more aware of stereotyping. He defines stereotype as “…conventional, over-simplified identification based on a few exterior qualities.”

Ellen Levine once said: “Rest on Truth for authority rather than taking authority for truth.”

Kazanzakis: “The only thing more real than truth is legend.”

The following weave contemporary and traditional:

Young people need books that describe contemporary children who are Native American, not just historical accounts as though Indian children lived “past tense,” only a long time ago. The following books have “real” individual characters and engaging stories that include traditional celebrations continued in contemporary ways – with family, food, music and even dance:

Authors to Know and Read

This list is neither inclusive nor without error. Please send your suggestions. Thank you!