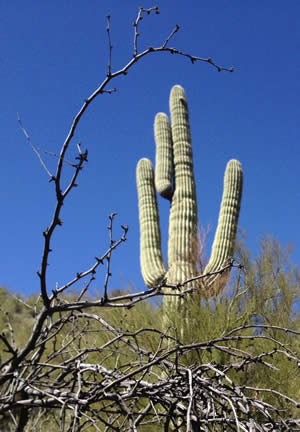 Tucson was a warm, sunshine filled time of crazy Tucson Book Festival and then quiet being with Bill. We slept a lot, ate amazing foods spiced with a variety of chilies, drifted in the hotel pool like a couple of old lizards. We did a bit of exploring too. We drove up to Kitts Peak Observatory about an hour’s drive outside of Tucson. First we drove through a forest of saguaro. Rocky steep slopes of foothills are covered with these spiky giant green fingers that stick straight up, many with odd -shaped bent arms. Just can’t help think about Peanuts and Lucy and smile. The road made a straight line through the beginning of the Todohodam Reservation and I shook my head thinking, how could anyone live, thrive or survive in this dry dusty land? Harsh hot sun, spiny spiky varieties of cactus, barren rock. What did they eat? Where was water?

Then the road curved up and up steep the mountain, nearly barren, sometimes sheer precipices. The desert transformed to a moon scape. We stopped at a border patrol search station. The guard dogs, German shepherds, sniffed at our car. The armed border patrol peered inside and asked if we were U S citizens. Yes, sir. Maybe. Strange.

Nearly to the top of Kitts Peak the first of the white domed observatories came into view, like a white round cap peeking over the mountain top. It was. But not at us. At the whole universe. Then another white dome and another, each one a little different size and shape. Maybe we were on the moon or Mars. We parked, stepped out of our car. The air was cool, the world quiet and still. We could look below and see huge stretches of flat rocky valleys and mesas and beyond at horizons that circled us, fifty miles away, maybe more. The dominant color was earth brown, gray, and above us, a concave shell of clear blue sky. I could smell fresh pine. Around the dormitories for daytime snoozing astronomers were clusters of pine, pinon and scrub oak.

Inside the visitor’s center were photos of galaxies and stars, planets and our familiar sun, with roving black spots, a shifting corona, a glowing halo and other surprises. Helium fissioning into hydrogen. (Did I get that right?) One photo caught my attention and I kept staring at it. A supernova, a spiral of orange, reds, tangerines – splashes and spots, swirls of burning energy. A supernova like this one exploded a thousand years ago. The Chinese had made careful observations and records. The label beneath explained that when a star dies, it explodes into an enormous bust of energy, a zillion times bigger and brighter than our sun, and creates uncountable new stars, new bodies of energy.

Maybe that’s what we do. I like to think that when I die my spirit will burst open like a blossom of light, radiant with color and warmth, and all that is me will transform into new life, new possibilities, new energy.

A supernova. A blossom. Meanwhile, be strong, like a seed.