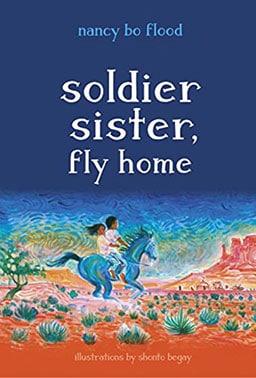 I was nervous about meeting the Piestewa family. I had sent the family a copy of my Soldier Sister, Fly Home. Lori’s Mom and Dad had been enthusiastic and supportive in every way. Now I wanted to ask them if I could dedicate the book in honor of their daughter. Lori Piestewa had been the first Native American woman to die in combat on foreign soil. I was teaching at Dine’ College in Tuba City, Lori’s hometown, when her unit was ambushed in Iraq. Everyone was invited to a memorial for Lori in the High School gym. The experience was emotional for me, transformational.

Why was I afraid to ask them?

Then I remembered. After my sister died, my Mom’s friends would stop by to say how sorry they were. Each time my Mom would begin crying. I was afraid my Mom would never stop feeling sad.

Now I was the visitor and I did not want to cause Lori’s Mom and Dad to cry.

Finally I called. Like before, their answer was positive and enthusiastic. Yes, they would like to meet and talk.

The Piestewa family welcomed me warmly and happily. They immediately began sharing stories, with plenty of teasing and laughter. I felt as if I had stepped back into my Italian grandparent’s home, “Come, come inside. Join us.” 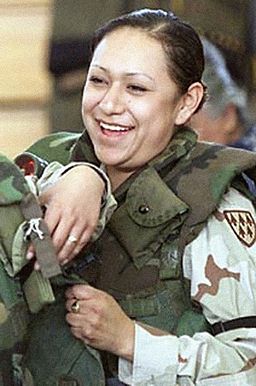 So many stories. Stories about family, about growing up, about Lori and her siblings. Percy Piestewa, Lori’s mother, turned to me and said, “I’m so glad you wrote Soldier Sister, and when I was reading it, I was so happy that Tess is mixed-blood, like Lori. It was often hard for Lori, hard to be both Mexican-American and Hopi. Many kids are mixed blood. It is important they have books like this to read.”

Both of Lori’s children were at our meeting. Carla, Lori’s daughter, was only three years old when her mother was deployed. Carla is now a college student with the goal to become a pediatrician. We talked about her future goals—first college and then medical school. Carla explained that she loves animals and has been given a wild variety of “pet gifts”—a pot-bellied pig, goats, a horse, cats and dogs, but she learned that she doesn’t like cleaning up pet-poop. She has decided to be a pediatrician instead. I laughed. My husband is a pediatrician which involves a certain amount of poop!

Carla has the same engaging smile as did Lori, her mother. He smile lights up her face, shines in her eyes. Carla is a straight-A student, also just like her Mom and her grandmother, and an outstanding athlete, excellent at softball (pitcher). Carla studies hard, works hard, and loves her large extended family.

Brandon, Lori’s son, often gets the worst of the teasing from his younger sister. They look after each other. Brandon is also a top student and is combining his academics with his love of baseball. As he returns to college this year, he will continue to study sports physical therapy.

The Piestewas showed such joy in honoring and remembering their daughter, sharing stories about her. Sadness too. Lori loved life. Terry and Percy talked about how Lori gave her life for her country. The Piestewas shared their desire for all warriors to be remembered with honor, but what did Lori’s death mean? Terry and Percy described how they have come to accept that God took Lori early in order to bring people together, to put aside their differences. In a mysterious and sacred way, her death has continued to bring people together. 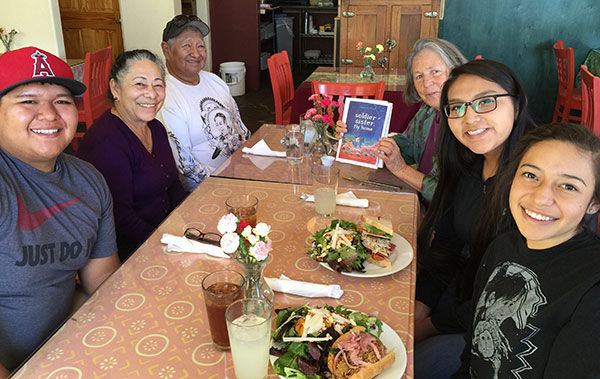 I thought about my journey over many years to write Soldier Sister and of all the voices—Navajo and Anglo and Mexican-American, old and young—that blended together to become this story. I often think back to the Tuba City memorial held shortly after Lori’s death. Thousands of people gathered to honor and celebrate the life and courage of this young woman, Lori Piestewa, fallen warrior. I hope Soldier Sister contributes a small part to putting aside differences and honoring how we are the same—in our grieving and in our celebrating being alive.