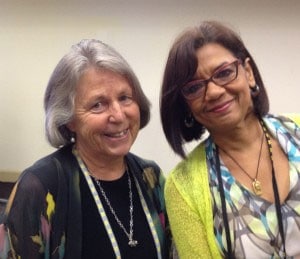 The surprise speaker was Sonia Manzano and you might ask, “Who?” Sonia is better known as Maria, the very person who has been the delightful—and courageous—Maria on Sesame Street for the past forty-four years!

Another surprise was that Sonia’s first children’s book, The Revolution of Evelyn Serrano, was this year’s Pura Belpre Honor Winner. On television as both an actress and screenwriter, and now as an author of books for children, Maria (Sonia) continues to break boundaries and ask children and adults to feel—and re-see, re-think—beyond our comfort zones.

On Sesame Street, Maria presented diversity to children in many areas that had been kept “silent”: gay friends, people of all ethnicities as stars, and for the first time on children’s TV programming, the celebration of death (Mr. Hooper) and birth (Maria’s baby) as part of life.

Sonia was the keynote speaker for this year’s celebration of the twenty-five Notable Books for a Global Society. She emphasized how seeing oneself in books is essential to every child’s experience. “Story” changed her life. When her fourth-grade teacher invited Sonia to see West Side Story, Sonia described that seeing her Puerto Rican people, music, dance, and culture celebrated on stage opened her own eyes and heart to seeing the beauty of her heritage.

Something changed inside her. No longer was she trying to ignore parts of who she was, instead she became eager and excited to learn more about her people’s stories—sing them, dance them, and speak them. In her memoir, out this August, Becoming Maria, Sonia Manzano shares her story as both a window and mirror of growing up amidst chaos and love in New York City.

This is the purpose of honoring books that serve as both windows that invite young readers to step inside the stories of children of other cultures and as mirrors, so that every child finds their own people, their own cultures, their own stories, celebrated and honored in a book. I guarantee you will too—take a look.