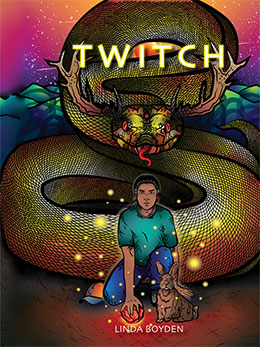 A new book soon to be released is Twitch, a YA novel written by Linda Boyden with illustrations by Kaylene Bigknife. Take a look at the amazing cover.

Fourteen-year-old Twitch Tsi’sdu Taylor hasn’t paid much attention to the old Cherokee stories. Sure, his family is Cherokee, but the stories are just the elders talking, right? After a freak car accident kills his aunt, Twitch’s father Eldon leaves a note that gives him away to his uncle, according to tradition. Overnight, Twitch has gone from being a city kid to being moved back to the family homestead in the forest. He argues that in the 21st century, hardly anyone follows the old customs. His uncle stays stubborn and Twitch finds himself stuck in a forest learning how to hunt with a bow and arrow. However, Twitch quickly discovers that this forest is far from normal. Many of the familiar Cherokee myths are coming alive, including one tied to his aunt’s death and as his father’s disappearance. Twitch must learn to be a Stitcher like his grandfather and father before him. Can he learn fast enough to save himself, his family, and pretty much the rest of the world? Is he man enough?

I had the honor of asking Linda Boyden, the author of Twitch,  how she came up with the idea for her book.  Here’s her answer:

As a child,  I loved to read fairy tales, all the standard ones, Cinderella, Snow White, etc. Later, as an adult, I enjoyed J.K. Rowling’s Harry Potter books, too. After reading them, I thought the basis of her fantasy was Celtic fairy tales, but she modernized them, so to speak.

I had also studied Cherokee legends and tales and attended many Returning the Gift conferences and learned more from those wonderful storytellers/authors. So I decided to write about a modern Cherokee teen, Twitch, who has to fight Cherokee myths/legends that were coming alive.

I am of Cherokee, Irish (from my Tennessee father), and French Canadian ancestry (from my mother whose grandparents moved south from Quebec to Massachusetts around the early 1900s).

Twitch is published by Native Realities and available from Red Planet Books and Comics.