I am the child of immigrants. My father’s father was orphaned at 14 and walked from the family farm near Prague to northern Germany to buy passage on a ship sailing to New York City. Alone.

My other grandfather, Thomas, was the son of Italian immigrants fleeing conflicts in Europe. His grandfather, Antonio, was conscripted to fight under Napoleon, walked from Russia back to his home in the Italian Alps only to encounter yet another war brewing. 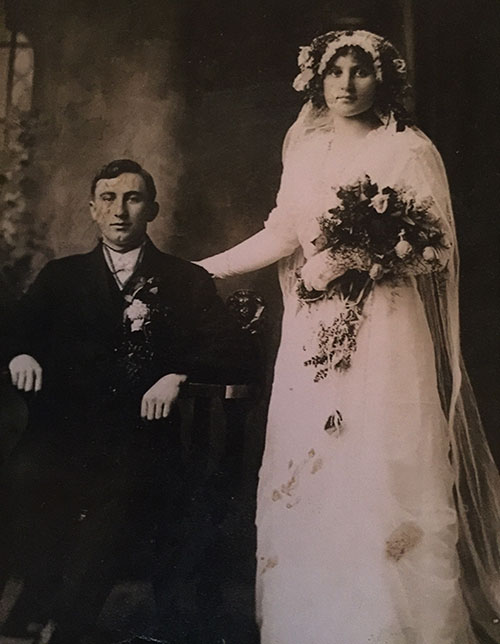 Grandpa Thomas and Grandma Bessie on their wedding day

Both my grandfathers farmed on rented land and worked second jobs to save enough to buy their own farm. My grandmothers raised chickens, tilled vegetable gardens, canned the harvests—beans, peas, corn, tomatoes—milked cows and helped butcher pigs. Grandma Bessie told me the story again and again of having to leave school after her mother died. Instead of beginning high school, she became the mother-substitute to her nine younger brothers and sisters. Grandma at 14 had to let go of her dream of becoming a teacher.

And then her sweetheart, my coal-mining grandfather, appeared one evening on a borrowed sleigh pulled by a prancing black horse. He invited her to join him on a wintery ride. While dashing over the snow, he proposed. She accepted.

I seldom heard my grandparents complain. They shared whatever they had with whoever showed up at the kitchen door. 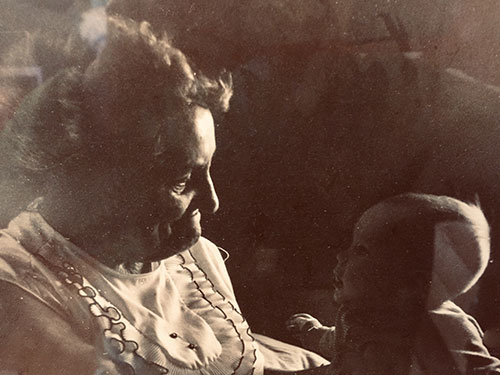 Grandma Bessie holds her first great-grandchild. She loved us all.

My grandparents never spoke of kindness, they did it. No matter how difficult the times, how little they had, all were welcome to sit in the kitchen, warm themselves, as Grandma cooked the big mid-day dinner. And they came. Widows, old and bent, with thin faded yellow hair wound tight into skinny buns. Women, sometimes white, sometimes Black, hungry and cold, warmed themselves by the wood stove while waiting for a husband to return.

Kindness to all. Share the beets, tomatoes, peppers, a dozen eggs. Cut a loaf of bread in half, wrap it up, give it away.

I am grateful for the wordless lessons taught by my grandparents.