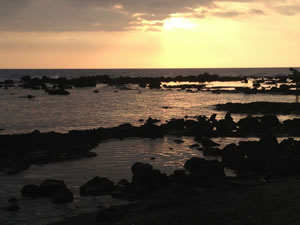 Four swimmers (including me) in black-skinned, neck to toe suits slipped into the inky rolling water. Eight pm. Time to turn on headlights and swim into the sea channel toward the hotel’s ocean lights. The only sounds were the roll of surf, the splash of waves, and the slap of water against volcanic boulders. Our lights shinned like swirling light tunnels, searching for what might be ahead of us but frequently we swept the beam across the darkness all around and behind. Was that a rock, a sunken tree or the horizontal lines of a reef shark? The ever-moving water played tricks on our peering eyes. Wouldn’t it be wonderful to see a black or white-tip swim by? Wouldn’t it be terrifying? Don’t even think about tiger or…

The water was cool but not cold. The waves were constant but not surging. The darkness was immense.

A black shadow-shape soared beneath us. Then another! The manta rays were here. They were hungry. We were their source of supper.

We shined our lights straight down. The light attracted plankton, tiny bits of plankton that would wash through the giant open mouths of the rays to fill their stomachs. Suddenly we were in a swarm of giant mantas. Their wings stretched out sometimes as wide as ten feet. Really. They soared, dove, came straight up or under us, and when just about to crash into one of us, flipped into a barrel roll, their enormous empty mouths wide open, sea and plankton flowing in. Black and white. Backs as dark as night; bellies as white as flesh; black spots, black and white stripes down their throats, wide fleshy rectangular mouths. What eerie, not-of-this-earth-world creatures. Silent. Swooping. Surrounding us like a flock of butterflies.

Wow. Once we emerged from our wet undersea world, that is all we could say Wow. Such a privilege of share the wildness. The realness. Wow.