A book for Earth Day … one earth, one humanity

A Plan for the People, Nelson Mandela’s Hope for His Nation

Where are we? In prison. With prisoner 466/64, Nelson Mandela. In a cell so small his head and feet pressed against opposite walls. This prison on Robben Island will be his “home” for the next twenty-seven years. During the first eighteen years, Mandela was confined to that solitary cell where he slept on the floor, ate, and attempted to move, think, survive. 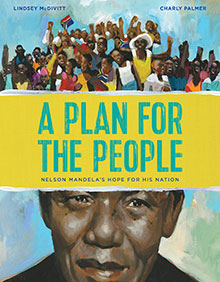 A Plan for the People, Nelson Mandela’s Hope for His Nation is a stunning picture book, appropriate for all ages, written by former South African citizen, Lindsey McDivitt and illustrated by Charly Palmer, published this year by Eerdmans Books for Young Readers.

Read it. Read it slowly. Let the information, the emotions, the ideas, and ideals of Nelson Mandela fill you head and heart. During Mandela’s twenty-seven years of imprisonment, he did not become embittered. No. Instead, he studied his White guards closely, learned their language, Afrikaans, and eventually gained their trust and respect. For Mandela and his White guards, trust replaced fear. Mandela struggled to comprehend why some Whites refused to respect people with dark skin. Mandela grew to understand “that all people, Black and White, needed to be set free from the hateful system of apartheid. He realized that ‘a man who takes away another man’s freedom is a prisoner of hatred, he is locked behind the bars of prejudice and narrow-mindedness.’”

As our nation struggles through its own imprisonment of prejudice and hatred, as we listen to the testimonies given at trials because innocent people have unjustly died by violence inflicted by those in power, let us pause, let us return to that cold barren cell and read again the words of prisoner 466/64, Nelson Mandela.

In twenty-seven years will we understand that racism, fear and hate imprisons us all?

Going out costs a lot (of water)

Talking about why water matters

Water on your head? An umbrella won’t help here

Water of all temperatures chills us out

How much water do you use daily?

Counting your blessings, drop by drop

Taking the too-long walk for water

Watersheds: the neighborhoods built around moisture

Blood in our veins, water in our world: life’s two connectors